Where should the stores be?

Prognosesenteret works with shopping centres, chains, stores, car dealerships and government agencies to optimise location and marketing. Our forecasts provide confidence that major investments have the best possible prerequisites for profitable operation and that regulatory authorities are in control of environmental impacts and the way that travel patterns and traffic change. 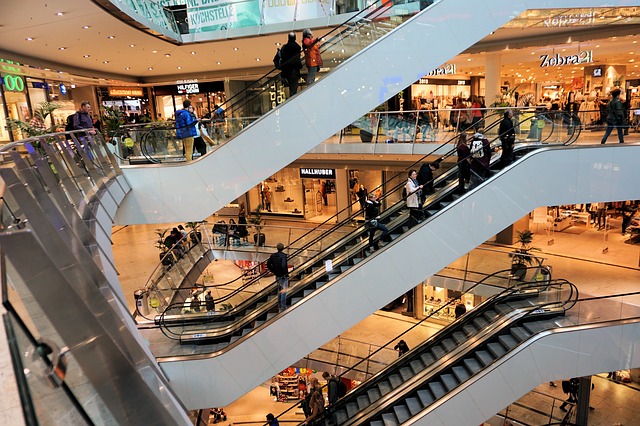 More than 10% of stores in Norway have a negative operating profit. There are many explanations for this but the main one is that establishment analysis is inadequate. Even the largest retail chains in Norway do not manage better than +/- 40% accuracy on their own revenue calculations. This not only leads to individual stores functioning poorly but also to unnecessary cannibalisation of stores that would otherwise be profitable.

There is over-establishment in many industries. Those who live in cities currently have less than one minute of driving time to the nearest grocery store, new shopping centres are opened with insufficient market basis and in the centre the battle for customers becomes increasingly difficult. Yet it is still possible to create new establishments and operate profitably – whether a store or shopping centre.

Classic establishment analysis adds up the number of people within a specified distance or driving time. Often there is little harmony between driving time selected and willingness to travel for the goods that are sold. In addition there is not enough opportunity to account for competition and the extent to which a new establishment leads to cannibalisation. This is a primitive approach that often gives way to disastrous results.

A good establishment analysis depends entirely on taking into consideration the realities of commerce. Consumers travel as little as they can to buy what they need. The ratio of the distance to your store and your attractiveness compared to the competitors’ attractiveness and distances from the consumer determines how many customers and how much revenue you receive. We can run up to 500 stores simultaneously, getting a tested model of existing services before we input the new. By creating a “before” and “after” scenario we see both what a new store will sell and the impact it has on the turnover of up to 500 competing/owned stores.

The curve below – the “distance decay curve” – shows the real relationship between market share and the distance to a store. The curve starts steeply before levelling off. Thus this method is called “gravity modelling” – the market share falls in the same manner as the acceleration of a stone in free fall; speed increase is large at first and then decreases with increasing distance from the point of origin. Whether selling cars or sweets, the curve will follow this principle but car buyers are naturally more willing to travel than those looking for sweets. Thus the driving distance is larger for cars as we approach the zero market share. 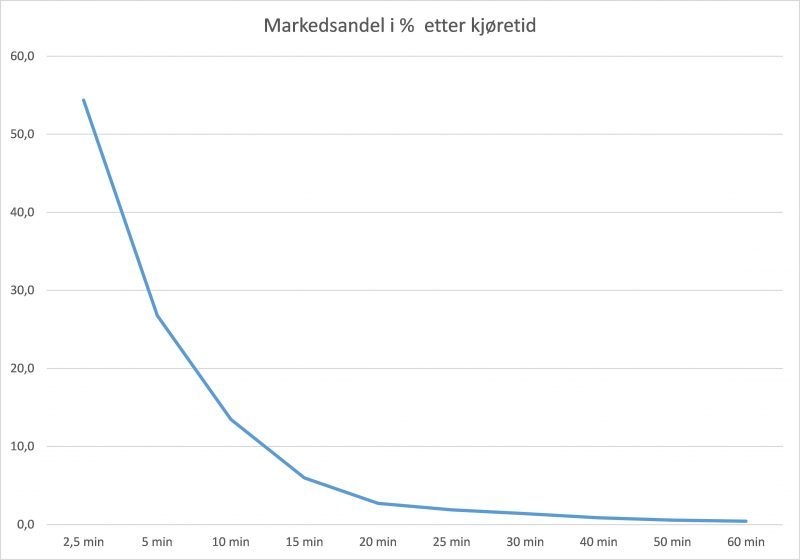 The map below shows the modelled market area for an imaginary new grocery store at Hamar. On the map it is easy to see how the market area is affected by competition and distance. A market area is never equal in all directions and it clearly shows why an approach with fixed time or distance gives poor precision.

The green point (end of the arrow) shows the new store and the black competitors. The market share of the store appears on the 100 metres squares, coloured green (low market share) to red (high market share).

The answers you get from this kind of research are important whether you are considering opening a store and are unsure of the optimal location or if you want to measure performance and market base for your existing stores.

Share:
Do you want more information about our services?
Bjørn Helge Nygaard
Nordic leader GIS
Marketing
+47 958 91 820
Send e-mail
By using this website you agree to our use of cookies.
OK